This guide explains how to use the advanced features in Up Tempo. These can be found underneath the Pitch and Tempo controls for any track. They are only available in the pro version of Up Tempo.

These features will work best with headphones as your device’s speaker is unable to play the whole range of sounds.

Tap ‘Add new effect..’ to get started. You will then be able to add one of the following:

These can be added to the track as a whole, or to a section of the track between 2 markers. You can add as many effects as you like and they will build incrementally in the order which they are listed. 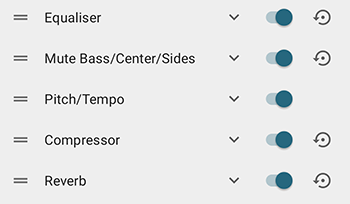 Once you have added effects you can long press to delete them from the list, or use the drag handles to re-order the effects.

Each effect will have a toggle button turn the effect on/off. If you can’t see the controls for the effect tap on the arrow next to it’s name. 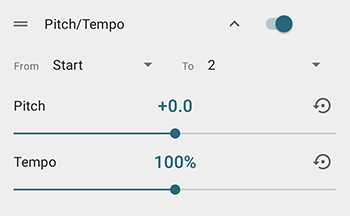 These controls are the same as the main pitch/tempo controls at the top of the screen. However they can be applied between 2 markers only (instead of to the track as a whole). They will build on any whole track changes that you have made. So, for example, if you have changed the whole track to 110 % tempo, and then change section 2 to 3 by 110%, section 2 to 3 will actually change by 121%.

The Mute Bass control allows you to isolate and remove low frequency sounds. This is useful if you want to remove the bass from your track so that it is easier to hear the main tune or speech.

Tap on the volume icon to toggle the base on/off. The slider lets you calibrate the range of frequencies that you cut out.

The effectiveness of the channel isolation algorithm will vary from track to track. 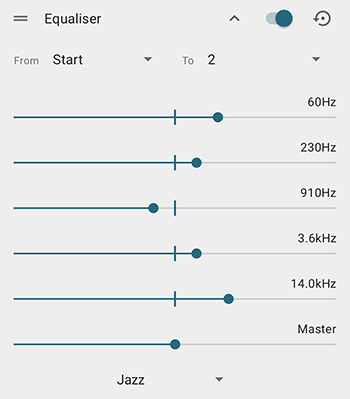 A 5 band graphic equaliser with master volume control. Use one of the presets or adjust the sliders to shape the sound as necessary. 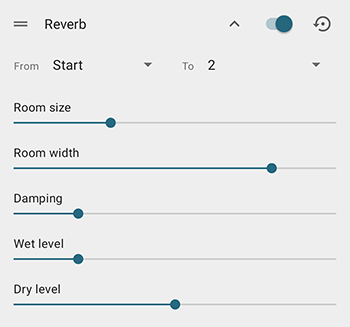 Reverb makes it sound like the track is playing in a larger space by simulating the echoes that occur from the walls, floors, ceiling, etc. This can give recordings a bit more life (like singing in the bathroom). It’s normally best to have reverb as the last effect in the chain. 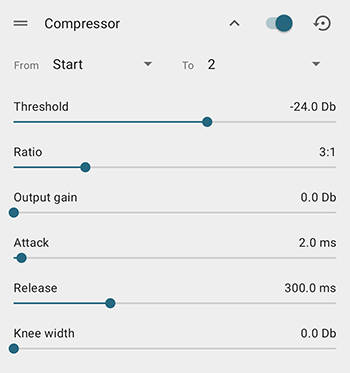 When your track has a high dynamic range (very loud and very quiet parts) it can be difficult to hear - either the loud bit is too loud or the quiet bit is too quiet. Compressors help with this by making the loud parts of the track quieter, giving a more consistent volume level. It’s normally best to have a compressor early on in the effects chain.