I decided to develop our Scales Practice app after coming back to playing the cello following a break of 10 years. I struggled a bit with remembering any of the different scales I had previously learnt! At the same time I also wrote myself a quick “cheat sheet” covering the different types of scales, their key signatures, and their relationship with each other. This is summarised below – I hope you find it useful to!

In this article I am going to focus on three forms of scale –  Major, Harmonic Minor, and Melodic Minor. I will cover other forms of scale as well as the different modes etc in  a future article.

You can download the Scales Practice app from the Google Play store.

The major scale is one of the most commonly used scales in western music. It is built on the following pattern of tones and semitones:

Therefore, in a one octave scale, the semitones come between the 3rd and 4th notes and the 7th and 8th notes, with tones separating all other notes of the scale. So to build a C Major scale, you start on the C note and go up one tone (two semitones), which gives D, the second note of the C Major scale. Then go up another tone to get the third note (E) and up a semitone to get the fourth note (F), and so on.

Music in minor keys sounds different from that in a major key, often with a sadder feeling.

There are two main kinds of minor scale – Harmonic and Melodic.

Harmonic minor scales are built on the following pattern of tones and semitones:

Compared with the major scale, the harmonic minor scale has its third and sixth notes lowered by one semitone.

The Melodic Minor scale is interesting because it is different on the way up to on the way down. Compared with the major scale, the melodic minor scale has its third note lowered by a semitone as it ascends and its seventh, sixth, and third notes lowered one semitone as it descends. It is built on the following pattern of tones and semitones:

Finding the related minor to every major

Every major scale shares its key signature with the minor scale related to it. To find the relative minor of any major, you can count down three semitones and three letter names.

For example, the relative Minor to C Major is A Minor.

The circle of 5ths

The circle of 5ths is a useful tool which illustrates the relationships between all of the key signatures and their corresponding major and minor keys.

An example of the Circle of 5ths diagram is given below. Beginning with C, the key signatures comprising sharps move clockwise around the circle. Each corresponding key is a 5th higher than the key before. The order of sharps as they appear in the key signature is also by ascending 5ths (F C G D A E B).

The key signatures comprising flats move anti-clockwise around the circle. Each corresponding key is a 5th lower than the key before. The order of flats as they appear in the key signature is also by descending 5ths (B, E, A, D, G, C, F). 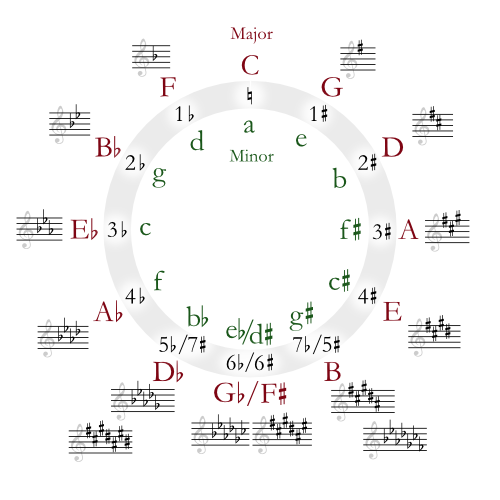 This diagram has been taken from Wikipedia, Circle of fifths.